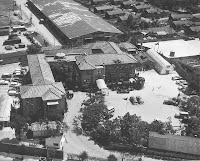 I just received several photographs from Stev Pitchford, who also worked at the TDC photo lab.

The one that I'm posting today is quite similar to the aerial view of USTDC that I posted earlier. However, the angle is just slightly different in this one.

You can see both of the flagpoles in the front parking lot here. The one to the far right of the picture was where the US flag was raised and the one to the left was where the ROC troops raised their flag. Flags were raised and lowered at the same times each day -- 8:00 AM (0800 hours, eight bells) and 4:00 PM (1600 hours, eight bells). Those efforts sometimes resulted in unintended consequences as I wrote in another piece during July 2007. I think the photo also shows more clearly the curved route that vehicles took when they entered or exited the TDC parking lot.

If you could see just a little further to the right at the bottom of the photo, you would see the entrance gate shown here. Because I always walked to work through the HSA east compound, I rarely went in or out of this gate.

Thanks to Sarj and Stev, I have more new photographs to share in the days ahead. I'm delighted with all of the images and memories that so many people have been willing to pass along here and I hope to add many more.

Right now I'm especially interested in interior photos (or even an interior diagram) of the USTDC building, all pictures of the east or west HSA compounds, the Linkou Club (original location or its later location), and the Club 63 (later the China Seas).
Posted by Don at 5/11/2008 02:54:00 PM

Just in back of TDC, on the left, you can just make out the softball field and to the right (the long building) belonged to Stratcom.