I recently asked for input on the layout of the USTDC building and I received this email from Ed Bunting:

I was assigned to the photo lab in the quonset hut in '57-'58. The building next to it housed a 24" X 24" horizontal copy camera and darkroom. The back of the building had a printing press for our only lithographer's mate. The building behind that was the photo commander's office and a storeroom. The photo interpretation unit and crypto unit was in the basement of the main building. There was another quonset hut off to the left that doesn't show in the photo that was the Seabee unit. That is about all I can remember. I hope it helps.

I know that some offices were moved around over the years, but I don't remember the quonset hut when I was there in 1973-74. Does anyone recall if that's true and, if so, where the photo lab was moved to?

Also, I have no memory of a basement in the building. I believe that the photo interpretation guys (Larry and Pete, in my day) were up on the second floor somewhere. Does anyone recall where the basement stairs were?
Posted by Don at 10/11/2009 01:35:00 PM 2 comments: 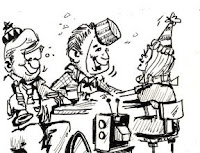 The party was well underway when the guest arrived at the second floor apartment. He arrived alone, as he always did, but he was grateful for the invitation and the chance to relax with good friends. The other guests, some there with their wives and others with their girlfriends, were helping themselves to the well stocked bar. He opened a can of Budweiser and began to mingle.

The host proudly demonstrated his “magic television” which turned itself on whenever he rattled his keys. He said that the first time it happened was during another party when someone dropped a glass on the tile floor and the TV clicked on all by itself. He’d spent hours experimenting with other noise sources to find one that might also work and the jingling key ring did the trick. The guest supposed it was less expensive than replacing broken glasses, but also thought that it would be simpler to just click the remote.

Someone turned on the stereo. It was an imposing behemoth from the Navy Exchange that fairly rattled the walls. The guests began singing loudly along with the music, mostly stuff from the sixties. Two guys in the room started voicing over the music in the style of Wolfman Jack (bringing you the BIG sound from the BIG town). They weren’t very good but nobody noticed and the other guests cheered them on.

The volume of both stereo and singers increased as the evening wore on and the guest wondered how the neighbors felt about it. He was a bit older than most of the other guests and thought about how he would react if he was one of the neighbors. He decided that he probably wouldn’t handle it well, especially if the partiers were guests in his country.

As the party continued into the night, he decided it was time to slip quietly out the door, catch a taxi and maybe drop by the Club 63 stag bar for a beer before calling it a night. He walked down the stairs, went outside and started up the street to find a cab.

As he walked under the balcony of the apartment where the party was being held, he felt what he first thought were rain drops. Only it wasn’t raining. One of the partiers had decided to relieve himself off the balcony onto the street below.

The guest jumped back under the balcony, out of the line of fire, until the phantom reliever stumbled back into the apartment. He considered going back upstairs but decided to forget about it and hailed a cab. After cranking down both of the backseat windows, he decided to forgo the stag bar and asked the driver to take him straight home…as quickly as possible.

After a long, hot shower (with lots of soap), the guest decided that he’d probably not be attending any more parties until his return to the States. He considered burning his clothes but decided to just have them washed the next day instead. He never mentioned the incident to anyone.

He didn’t realize that throughout his life, this night would be one of the first things he recalled whenever he thought about his fifteen months in .

Needless to say, he’d have preferred most anything else. 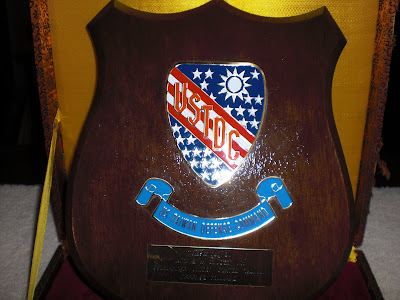 Some time ago I wrote that I was looking for a photo of the USTDC plaques that were presented when individuals departed Taiwan back in the 1970s. I disposed of mine years ago and haven't seen one since.

Retired SCPO Craig Chapman was Boatswain's Mate at TDC during 1975-1977, and he provided this photo of his plaque and presentation case. I don't think the presentation cases were used during 1973-1974 because mine just came in a cardboard box. Hmmm...maybe that was just mine.