Stev Pitchford was a Navy photographer at TDC during 1959-60.  Many of his excellent photographs have been enjoyed by countless visitors here.
Stev recently went through a stack of letters that he wrote to his parents years ago.  What follows are his comments about the letters, followed by excerpts from some of those that he wrote during his time in Taiwan.   I really enjoyed them because I think they're typical of letters written by young men far away from home years ago, and probably similar to letters written by today's young men and women stationed around the world.  Of course most of today's letters are probably typed on a keyboard and received by Mom and Dad within seconds after they're sent.

Mom and Dad saved the letters I wrote to them while I was in the Navy.  After about 50 years, I've gotten around to reading them.  Some things I remember pretty well, but there's a lot I don't recall.
A few remarks about Chiang Kai Shek (Gemo) and President Eisenhower (Ike) were a little impertinent, but I was a teenager at the time.  Looking back, I realize what a privilege it was to have come into personal contact with two of the most significant figures of the 20th century.

Some time ago Jim asked me if I'd ever heard of the Taipei Volunteer Fire Department, a social organization that he belonged to during his tour in Taipei.  I'd never heard of it, but Jim recently discovered that they're still around, and have been since 1955.  You can find their website HERE.

A couple of days ago I posted some excellent photographs of the MAAG Officers Club that were taken in 1960 and that were provided by Elizabeth Feldmann. She has now sent me some additional images from that period.

Elizabeth says that she had many great experiences during their assignment to Taiwan.  Because of her husband's job, they were invited to the British Embassy for Queen Elizabeth's birthday observance.  They were also invited to the Korean ambassador's home because Captain Feldmann used to brief him some years earlier when he was stationed there.

She continued, "We used to go to Sun Moon Lake with a picnic lunch, haul all the kids and our amah and get rowed around the lake for a few hours.  I remember going roller skating at a park not far from the river. We had three of the children with us and we gathered quite a crowd watching us. (I think they were waiting for my husband or myself to fall down.) Thank goodness we didn't!

I remember going down-island to a glass blowing factory.  The bus was so old and rickety I wondered if we would make it back.  I found out what happened to all of our old coke and beer bottles.  Very young children were blowing them into big round  green and brown balls that were used with the fishing nets.  All of us women had to buy some of these so the bus was really overloaded on the way back!

There very few cars, but boy did they blow their horns...and just race all over!  I never drove over there; I was too scared!  I felt much safer in a pedicab!

I received a very nice note from Elizabeth Feldmann, wife of Captain Gerald Feldmann, the MAAG Officers Club Officer during 1960-1961.  His club manager was Air Force Chief Warrant Officer V.W. Loiselle, whom I mentioned about a year ago.  She wrote about the exciting times in Taiwan and the beauty of the country.


Elizabeth provided these great photographs of the MAAG O-Club that were taken in 1960. 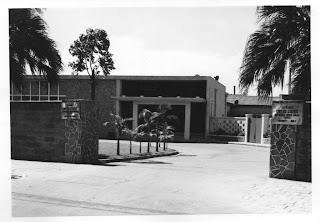 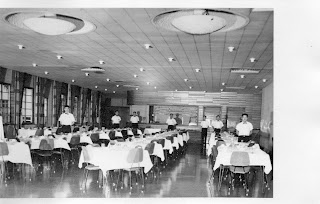 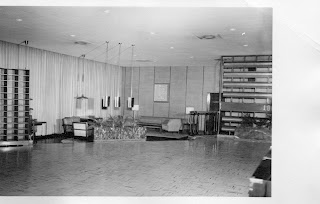 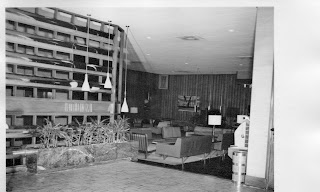 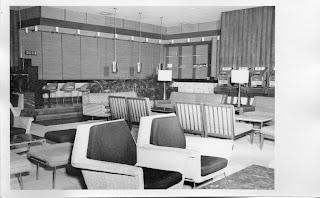 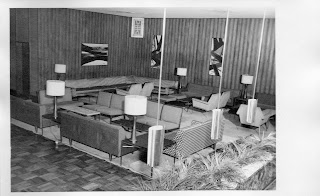 There is the front of the building, the main bar, the dining room and the lounge.  She writes that there was also a stag bar, swimming pool and a barber shop at the facility.   She and her family lived across the street in a compound that she believes was referred to as MAAGville back then.

According to old friend Kent Mathieu (Taipei Air Station blog), who was night manager at the O-Club Annex, the main club was located on Chung Shan North Road, across the street from the FASD Hostel and about a hundred yards or so to the north.
Posted by Don at 3/19/2011 11:17:00 AM No comments: