A while back, I added a link to Rick Courtney's Taipei Military photos page in the right-hand column of this blog.

Rick just sent me a link to his new Armed Forces Network Taiwan page, where you can listen to an AFNT broadcast from June 23rd, 1968. The announcer was Frank Fellers, who served with Rick at STRATCOM in Taipei but who also had a late-night radio show on AFNT. At that time, AFNT was in the Sugar Building in Taipei where the telephone exchange was located.

Rick has edited the tapes to filter out the noise, and the results are incredibly good!

I don't usually comment on current events in Taiwan, but the Request For Proposal (RFP) by the US State Department to build quarters for US Marine guards at the AIT facility in Taipei is really fascinating.

I only recently learned on-line that American military personnel have been assigned to a defense attache role in Taiwan for the past couple of years. Now it appears that we plan to increase US military presence again with uniformed military guards. Though all of this is in a purely diplomatic setting, I expect that we'll be hearing a lot more about it, from both Beijing and Taipei.

An editorial in today's Taipei Times questions what's really going on, and seems to suggest that the US is simply trying to increase tension in the region, which makes no sense to me at all. My first reaction was that the move represents a possible shift in US policy regarding Taiwan, however unlikely that may seem. The truth may lie somewhere else entirely, but Secretary Rice is a pretty sharp cookie [Did I just call the Secretary of State a cookie?] and I'm sure that she and her staff have all this under control.

In any case, things could get really interesting in the days ahead.

I'm sure that not everyone reads all of the follow-up comments to my posts, so some may may have missed Misty's follow-up to my Historic Preservation post.

There's a website owned by the Taiwan Government Information Office that has a lot of old photographs, including some of the naval hospital, American housing and the MAAG compound. I think these are probably all from the 1950s or early 1960s but they make for interesting viewing. Check them out.
Posted by Don at 4/21/2008 09:19:00 AM No comments:

The American Institute in Taiwan (AIT) has been the de facto US embassy in Taiwan since we severed diplomatic relations in 1979.

According to today's on-line edition of the Taipei Times, the US may be preparing to post marines to AIT as guards, just as we do at our embassies around the world. Such a move might not seem important to most of us, but in the world of international diplomacy, I think this is a pretty big deal.

The story also mentions that the US began placing military attaches there in 2005.

Check out the article and let me know what you think.

Some of you might remember the home of the American ambassador to Taiwan on Chungshan N. Road.

I recently came across this article in the archives of the Taipei Times from November 2, 2002. The house was converted into an art house movie theater and exhibition space after we closed our embassy.

The article also describes the American military presence and how it affected those who lived and worked in that part of Taipei -- very interesting reading.
Posted by Don at 4/20/2008 12:34:00 PM 2 comments:

Email ThisBlogThis!Share to TwitterShare to FacebookShare to Pinterest
Labels: History, The City 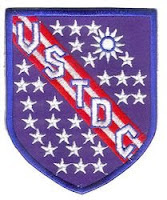 Just out of curiosity, did anyone reading this blog have the winning bid for this patch on eBay this evening?
Posted by Don at 4/09/2008 09:12:00 PM No comments:

Email ThisBlogThis!Share to TwitterShare to FacebookShare to Pinterest
Labels: Awards and Badges

I mentioned earlier that I couldn't find much of a record for the Navy admirals that commanded USTDC. I still don't have much, but I thought I'd post a few tidbits that I've gathered from around the internet. None of these are from official sources, so I can't swear to their accuracy, but I've included links to my sources.

I came across this article today and thought it might be of interest to some of you. The Taiwan government has designated Taipei's Yanmingshan Mountain as a cultural landmark. Since I lived in the hostel in 1973-1974, I'm not sure where this is. Please take a look at the article and let me know what you think.

Also, they've done the same thing for the "...dormitories of the US Taiwan Defense Command." What dormitories are those??