I recently received a note from Joseph "PAT" Halton, the son of Navy SH1 J.J. Halton, who was the Club Manager of the EM Club in Kaohsiung from 1962 until 1967.  Pat included a photo of the pennant that was presented to his father upon his departure from Taiwan. 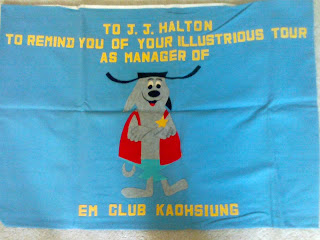 Pat wrote:  "I recently found one of my father's service mementos. It's a hand made pennant of "Deputy Dog" with a note thanking him for his service as Manager of EM Club Kaohsiung.  My oldest brother had it for years, unfortunately he passed away in '09; so after quite some time in "mothballs" this memento of our Dad's service is seeing the light of day for the first time in ages.  I just had to try and see if I could find out anything about it, or more importantly my father, or even the person who made it or the people he served with.

We lost my Dad back in 1972, and I remember seeing this pennant and how cool I thought it was. I will soon be mailing this to my youngest brother and am sending the information I found on Kaohsiung along with it. Maybe you or someone my Dad served with can add more:  'James Joseph Halton retired in the mid-60's after 24 years of service in the Navy. He was a Boatswain's Mate originally, but retired as a Ship's Serviceman First Class (SH1). He was originally from Colfax CA and retired in Carson City, NV. He served in WWII, Korea and Vietnam.'

I am a 29-year Navy veteran and really appreciate you guys keeping our history going, so others may know. Thank you for your service and God Bless!!