Kent Mathieu sent me a link to the history of this club, and what its descendant is doing today. Sounds like a good place for veterans to check out when visiting Taipei.

Sarj Bloom sent in these items from the Navy Club. I'm fairly certain that it was no longer there by the time I arrived at USTDC in 1973. Many of my friends were navy people and I'm sure someone would have mentioned it somewhere along the line. I believe that R&R flights to Taipei had been discontinued by then so maybe it closed at that time. Does anyone know?

Here are Sarj's photo and comments: 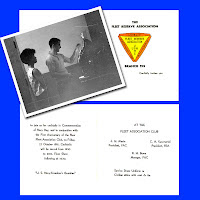 I know I said the Club 63 was the best place in town to eat, but I forgot to mention another place just as good and a lot more intimate. The Navy Club (Fleet Reserve Association) just down Shung Shan Rd. from the compounds, maybe a mile, was in the back of a building on the main street. You went down an alley and into the parking lot.

The downstairs had a bar and on the other side of the bar, through a door, were the slot machines. In the slot machine room there was a small office with a window much like a ticket window. Upstairs was the restaurant, bandstand and dance floor. It wasn't a very big room but very comfortable and had great service.

On payday I would go to the Navy Club and buy a "chit" at that little ticket / change window. The chit would be for dinner and drinks for anytime in the future. Then when it got near payday again and I didn't have much money my wife and I would go to the club and have dinner and drinks and then go gamble the last of our cash on the machines. We would go home broke but knew that in the morning I would get another check. The picture of my wife and me at the slots was taken by someone at the club, probably sometime in 1963.