Coolies In The Compound 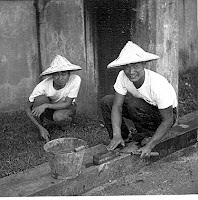 Sarj sent this photo of Chinese laborers who worked around the USTDC compound. His comments follow:

Here's a photo of two of the Chinese Coolies that worked around the building and kept the generators running. The generators were in the building right next to the lab. These guys would come in often. They all wanted to learn English so much.

There was on older man in particular that I befriended and he was a nice gentleman. I tried to teach him a little English and he would teach me some Chinese. They had a small hibachi and would heat their meals outside the generator building.

I thought their lunch boxes were very unique. they were aluminum, I think, and had another container inside that kept the fish or whatever separated form the rice and veggies in the main compartment. I had some of these around for years...Does anyone remember the little lunch containers?

Good photo, Sarj. I don't think we were still being powered by generators in 73-74, but I can't say for sure. I do remember the guys who used to spend a lot of time sprucing up the inside of the building. It seems to me that there was paneling that needed oiling but I know that the door plates were all brass and those guys kept them gleaming!
Posted by Don at 5/29/2008 06:06:00 PM