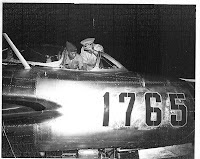 This MIG-15 fighter jet was flown to Taiwan from Zhejiang's Lu-Qiao Airport on Mainland China on March 3, 1962. The defecting pilot was Liu Chen-se.

Liu was rewarded by the Taiwan government with approximately 50 kg (110 pounds) of gold and was given the position of Deputy Director of a Republic of China Air Force radio station. He retired in the grade of colonel.

The US admiral checking out the MIG-15 in this photo is Vice Admiral Melson, Commander USTDC.

Today the aircraft is located at the Taiwan Air Force Museum and you can view it here.