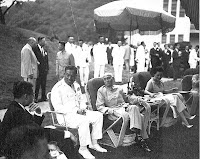 Sarj sent in these two photos taken by a USTDC photographer at what appears to be some sort of reception at the Chiang estate on Grass Mountain. Can anyone identify the westerner in the dark suit to the left of the photo? Sarj says it was taken sometime in 1962 or 1963 and that the highly decorated Chinese officer just to the left of Chiang was probably his son from a previous marriage, Chiang Ching-kuo, who took over the reigns of government for a while after his father died. 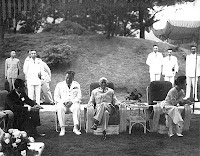 Madame Chiang is to the right of the Generalissimo. Interestingly, she is smoking in these photos, as many of us did in those days. It apparently didn't hurt her too badly because she died in her Manhattan apartment in 2003 at the ripe old age of 105.

When I was at TDC, Chiang Kai-shek had not been seen in public for quite some time and the rumor was that he had passed, but the government would not acknowledge that until Mao Tse-tung also died. It sounds like a typical GI rumor, but then again, who knows?

Another rumor was that Madame Chiang was the owner of the Grand Hotel. Actually, that one was usually stated as fact. Does anyone out there know for sure?
Posted by Don at 5/30/2008 09:46:00 AM

Don, your blog is excellent. The pictures on you blog are priceless since most of Taiwanese people then could not afford cameras. The officer next to Chiang is NOT his son, though I don't know his identity.