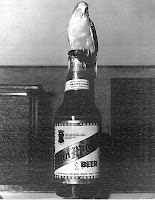 Many enjoyed a cold beer on hot days in Taipei. As I recall, there were a lot of hot days.

We were told never to buy mixed drinks in town because the ice was sometimes made from Taipei tap water, which contained all sorts of nasty critters. I read somewhere recently that it's still like that.

So unless you enjoyed drinking sugary soft drinks, then you probably cooled off with a cold beer...or two. A favorite of many throughout the Far East was the Philippine export, San Miguel. It seems to have been the favorite of Sarj Bloom's parakeet as well.

By the way, I had always heard that the San Miguel brewery was mostly owned by the family of General MacArthur. It's probably just another GI rumor, but has anyone else ever heard that?
Posted by Don at 5/30/2008 10:42:00 AM

Do you or anyone remember Chies Way very carbonated 7up or 5 star cherry soda. saparilla or of course Plum Liquor!!