Christy Veasey, daughter of SGM Ronald E. Veasey, provided several items for the American Footsteps in Taiwan exhibition and has graciously consented to let me show them here as well.

SGM Ronald E. Veasey was assigned to the US MAAG with the Southern Advisory Team in Kaohsiung from 1968 to 1970.  SGM Veasey was a veteran of the Vietnam War and served at the US Military Assistance Advisory Group in Saigon.  He and his family lived in the Kaohsiung HSA housing area located just outside Tsoying Naval Base.

SGM Veasey is seen in the photos below going through the final Jump Master Personnel Inspection (JMPI) prior to a jump with a Taiwan Airborne unit.  Taiwan Army LTC Chang is performing the JMPI. 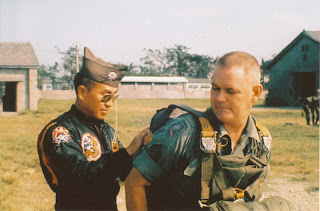 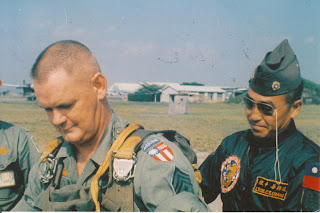 SGM Veasey's certificate of appreciation from the Taiwan 2nd Field Army, both in English and Chinese, signed by LTG Hou Cheng-ta. 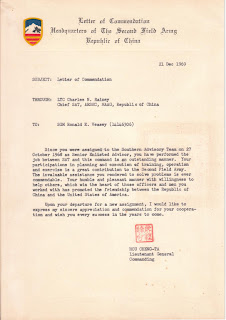 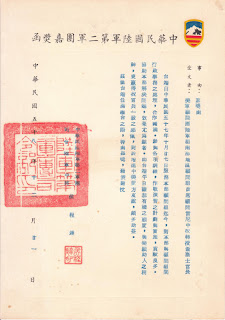 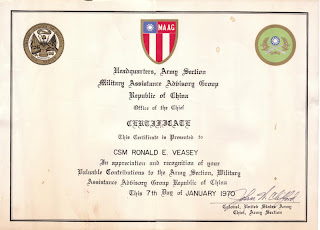 SGM Veasey is seen in the lower left-hand corner and in the OH-6 chopper seat in the "Taiwan Loyalty Newspaper," Fengshan Edition.  Fengshan is located east of Kaohsiung and home of the Taiwan Airborne Training Center. 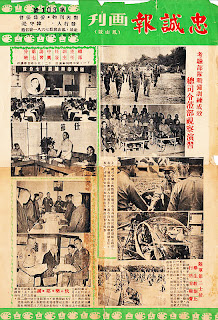 After Taiwan, SGM Veasey was reassigned to Germany, where he was promoted to Command Sergeant Major.  He retired at Fort Benning, Georgia after 27 years of service.  He passed away in 1994 and he and his wife are interred at the Main Post Cemetery at Fort Benning.
Posted by Don at 11/09/2010 05:00:00 AM

Don,
Thank-you for posting about my Dad. Taiwan was a great experience for our whole family. From the lizards on the walls in the house to the grass rug covering the whole house to detour snakes. My school Stephen B. Luce was right behind the house but we did'nt climb the 6 ft walls separating the house from the school due to the shards of glass embedded in them. From school to the economy. Happy houses, Mom didn't like that word, to the railroad track, with rice paddy on left side going to town, and rick shaws and bicycles everywhere. Thanks to the people of Taiwan for making our tour unforgetable.