Scott Ellinger has assembled the complete list of MAAG Chiefs from 1951 to 1979.  At the end of the list are photographs of all of them.

There was a brief period in 1958 when USTDC and MAAG were combined, but it was ultimately determined that this structure was neither as efficient nor as effective as two separate entities.  The Communist Chinese artillery attacks on Quemoy and Matsu during August of that year were largely responsible for the return to the former command structure. 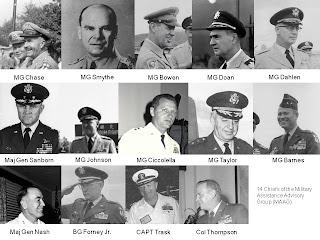 Are you aware of any information as to the listing of duty assignments and responsibilities or functions of Army Section officers? My father was assigned twice to MAAG ROC. Our family was there in Taichung 1965-1966 and then 1969-1972 in Taipei.