US Military Withdrawal From Taiwan -- 2

Yesterday I described the marching orders given to the Department of Defense regarding the withdrawal of all U.S. military and civilian personnel from Taiwan during 1979. Neither the CINCPAC, Admiral Weisner, nor any high ranking U.S. officers had been allowed to visit Taiwan since at least 1976 when Weisner assumed command. A specific request to visit was denied by the Secretary of Defense during July, 1978.

But Admiral Weisner finally got his chance when President James Earl Carter sent a delegation to Taipei, headed by Deputy Secretary of State Warren Christopher. Unfortunately, that was on 27 December 1978, just after Carter's announcement that he was severing diplomatic relations with the Taipei government on January 1st. That 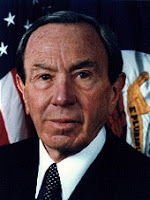 tumultuous visit is described in the 1978 CINCPAC Command History:

The President had sent a delegation led by Deputy Secretary of State Warren Christopher. Admiral Weisner and his Director for Logistics and Security Assistance, RADM A.S. Moreau, Jr., USN, were in the party, as were other State Department officers and Mr. Mike Armacost of the Office of the Secretary oof Defense (International Security Affairs). The party flew from Honolulu on Admiral Weisner's plane, arriving in Taipei on the 27th.

The motorcade, en route from the airport to the Grand Hotel, was surrounded by a mob of young people who assaulted the cars. Described in the press as "the most violent youth outburst ever experienced here," the youths pasted mud, splashed paint, threw eggs, placed national flags on the limousines, stepped on the roofs and hoods of the cars, and broke the glass in several [cars]. The front and back windows were shattered in the car in which Admiral Weisner, Admiral Moreau, and COMUSTDC, RADM James B. Linder, USN, were riding.

About halfway along the route the officers departed that car and took a taxi to the TDC Command Center. Deputy Secretary Christopher was in a car with Ambassador Unger; they finally got to the Ambassador's residence. There were no personal injuries except some cuts from the breaking glass.

The President said that he wanted the mission to be a success, but only if it could be carried on safely. If not, the party was to return to the United States. Admiral Weisner later noted that he was glad the decision was made to remain because the talks were important to both sides and he believed it was necessary that they be held at that time.

The talks were held, although several times demonstrators gathered and en route to one meeting COMUSTDC and his Chief of Staff were accosted by a group of about 100 who closed around their vehicles and kicked the sides and beat the windows.

The Christopher party departed Taiwan as scheduled, without any further harrassment.

I had just packed my household goods at our New BOT housing in Tien Mu on the morning of Dec 27th. I was a very uneasy time for everyone. Although I had been on island for a tour from 5-73 until 7/55, returning on 1/77 and leaving on 2/79 and had many local friends it was just uneasy.
My family and I packed our things and moved into the Tien Mou Guesthouse, maybe 1/2 mile down the road.
Some interesting thoughts were of my trouble getting the locals to pick up the many items I had "chopped to them since arriving in country. The practice was you could sell stoves, air conditioners, washers & dryers, cars, electronic equipment went you first got on island....normally receiving 10% down and signing an official document, "which you chopped" and filed it at PMO so when you left the island it was easy to process, account for your large amounds of money (as always everyone was on the alert for blackmarking), and to insure you could process out properly to be able to leave on your scheduled date.
Many of those merchants were now concerned that the value orginally on the items might drop and in a two cases the orginal buy never came buy, and I items to others.
I will submit another post shortly!

This is Bill again, (not yahoo)....now we were to live in a guest house until our date to leave. I had re enlisted to go to Iran...anyone remember what happened over there right after that?
Anyway, my orders to Iran we cancelled and since my reenlistment was based on a guaranteed assignment, I opted to go to the U.S. and get out as I coulnt get another good overseas location. NOTE: For my job a tech controller overseas is the only place I could work as in CONUS all of my type positions were civilian held. I tried for Okinawa, Panama, etc. but no luck.
So now, here I am in a guest house with the govt putting out word to stay off the street, etc.
Things did cool off as far as I was concerned by early Jan 79. I went to work on Grass Mtn as a friend would pick me up, we still went to the China Seas, etc with friends or by taxi.
One last note, the old downtown airport was still in existance....early in 79 (I think), they opened the new CKS airport. The downtown airport is still open for only domestic Taiwan flights.
Thanks