Electronics at the Exchange

Like a lot of the buildings in the compounds, I can't recall what the interior of the Navy Exchange looked like back in '73-'74. I'm sure they had all the usual items like clothing, jewelry, cosmetics, etc., but I just can't picture the layout of the place.

It seems to me that their cameras and electronics were located in a small room toward the back and to the right, but I can't swear to it. I bought a small Sony portable TV and a Panasonic portable radio shortly after I arrived in Taipei, just so I'd have something to watch and listen to in my spare time at the hostel.

I remember that Pete Ayling, one of my Army buddies and a great deal-maker, scoffed at my proud purchases, saying that I wouldn't be able to make a big profit on them when it was time to head back to the States. He was right, of course, but I didn't buy them to resell. Now my fridge, on the other hand....

Many of my friends bought expensive cameras, televisions and stereo equipment at the Exchange. I remember that one of my Navy buddies, Ken Royce, had a really nice reel-to-reel Akai tape deck and amplifier at the apartment where he and his wife lived that probably drove his neighbors crazy. Another Navy friend, Larry Driscoll and his roommate had a monster sound system with Bose speakers -- the first of that brand I'd ever heard. I was stunned at how clear and crisp they sounded, even back then. 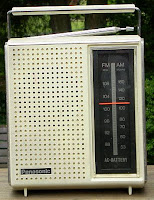 My TV and radio both lasted for many years and I got a lot of use out of both. This morning I searched the internet and was pleased to find these photos of the same models that I bought. My radio was black instead of white but that's definitely the same model.

The jewelry counter was just as you walked in to the left. The kids clothing was behind it. Geranimals were big in the late 70s and they sold clothes with Geranimal tags.

I need to think about this, Don. I can probably get the mental lay out for you in a few days. I have to revisit in my head...

From Taipei American School Classes of the 1970s, comments posted in response to post by Ed Gerrity, Feb. 13, 2012:

Elizabeth Binsfield Ed Gerrity, as I recall, when you walked in, Jewelry was right in front. Blue jeans/hang ten t-shirts were behind that. Registers to the left, and cosmetics not far from there. Beyond that, I'm lost. I tend to confuse that with the Berlin PX from the late 60s all these years later. February 13, 2012

Ed Gerrity : Great Memory "EVB"... girls and ladies stuff on the right just as you entered, bathrooms against the far wall, camera stuff on the left, keep walking the albums in the bins were on the right and kitchen stuff and appliances,.. and all the way in the back of the main floor there was .."THE COMIC BOOKS" in the Comic Book circular racks.. I lived back there when I was young LOL.. February 14, 2012

Daniel Ferguson Ed Gerrity: I seem to remember that in 1967 (whether before or after that typhoon, I can't be sure) the record albums were not far back from the main entrance just to left of center. I distinctly remember picking up my (non-pirated) copy of Jimi Hendrix's "Are You Experienced", as well as an album by Balachander, the South Indian Veena player, at that counter in that location. February 14, 2012