US Military Withdrawal From Taiwan -- 1

The declassified CINCPAC History for 1978 provides some fascinating details about the events leading up to the complete withdrawal of US military forces from Taiwan in 1979.

Starting on page 62 of the report (PDF page 86/744), it reveals that shortly after President Nixon's visit to the PRC in 1972, the first steps were taken to withdraw all forces from Taiwan. It doesn't detail what specific steps were taken at that time but six years later, on 18 May 1978, the Joint Chiefs of Staff advised CINCPAC that "the highest authority" had directed that DOD military and civilian presence in Taiwan be reduced to 660 personnel by 1 October 1978 and that all U.S. forces were to be withdrawn by 30 April 1979.

Though there were some units exempted from the total count, such as MAAG, Embassy, and USTDC's J63 shop, DOD personnel strength stood at 654 by 1 October 1978 and USTDC was down to 80. That USTDC figure probably did not include some others who occupied office space in the building, such as the Air Force Office of Special Investigations which had earlier moved there from Taipei Air Station. 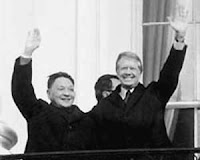 Last December, Les Halfhill described what it was like in Taipei after President James Earl Carter's withdrawal announcement and Barbara Auch recently shared her experiences during that period. Barbara provided some details about the arrival of the CINCPAC, Admiral Weisner, and his less than cordial reception by the citizens of Taiwan.

The Admiral had never visited Taiwan since he became the CINCPAC in August 1976 because such visits by U.S. high ranking officers had "been discouraged," according to the report. Weisner specifically requested permission to visit during July of 1978 but it was turned down by Secretary of Defense Harold Brown. After looking at Brown's biography, it's my own personal opinion that he wasn't the one making the decision. I believe it probably came directly from President Carter, with advice from Cyrus Vance, his Secretary of State, or Vance's deputy, Warren Christopher.

Admiral Weisner finally got his chance to visit Taiwan as part of a delegation headed by Deputy Secretary of State Warren Christopher. I'll talk about that visit tomorrow.
Posted by Don at 2/01/2009 05:00:00 AM