This photo is of poor quality, but it's the only one I've ever seen like it. It's the main entrance to USTDC, but with a much different arch from what was there during my assignment in 1973-74. I also notice that there appear to be floodlights on either side of this arch, which weren't on the later version.

I believe the photo was taken sometime around 1956, though I understand from Stev and Sarj that there was no arch at all during the late fifties and early sixties. I think that perhaps they may have had to remove this arch to allow the passage of construction equipment when TDC was remodeled.

If anyone has any information on this structure, like when it was built, when/why it was removed or when the more ornate red arch was constructed, please let me know. 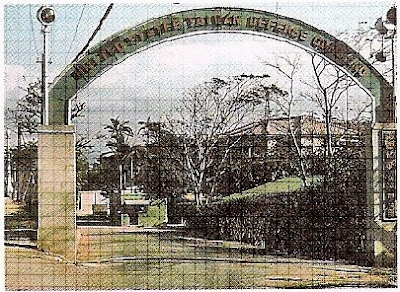