There were two hostel buildings, one behind the other, located just to the north of the East Compound main gate. I've written several pieces here about the place, but I wanted to post this photograph of a typical single room. 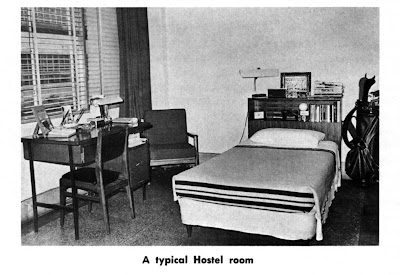 I believe the front hostel had mostly two-person rooms, while the one I lived in (in back) had single rooms like this one. It was slightly larger than it appears here because there was a combination closet/dresser/storage cabinet just inside the door and there was also a private bathroom with stool, sink and a shower.

The room was air conditioned and because electricity was included in the rent, I kept the place very cool during the summer months. I remember one weekend I noticed one of those large cockroaches, that seemed to be everywhere, coming into my room under the door. He stopped for a few seconds, apparently decided it was way too cold for him, and skittered back out again.

The hostel was adequate, fairly inexpensive, and just a short walk to USTDC and all of the Headquarters Support Activity facilities in the compound. I've circled the window in this photo where I believe my room was located. To the right of this photo, you can see some of the East Compound. You can just make out the striped antenna slightly to the right in the background that marks the location of the US Taiwan Defense Command building. 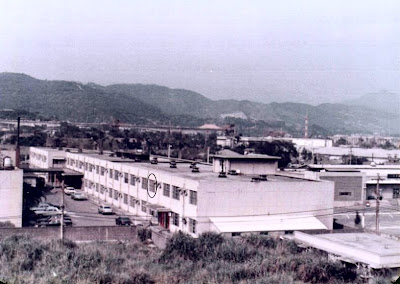 Air Conditioning? Are you sure you were in Taiwan? This is just another reminder of how fast things changed in Taiwan. It went from somewhat like a third world country to a economical giant in a very short time. Do you think that the US can take any credit for this? Yes we can is what I think because we gave them the security to develop.

Yep, absolutely sure. Just to the left of that window, and up near the ceiling, was a window air conditioner that they'd punched a hole in the wall for. I had a similar setup in my office at TDC. But the unit at TDC wasn't sealed very well so we used to get a lot of mosquitoes in the office.

It seems to me that the hostel I stayed at was near TDC and was right on Chung Shan Pei Lu. The road was just out front. This was in September or October 1963. Two of us were in a room and I don't recall and air conditioning.

One time we determined to mount a search and destroy mission on the cockroaches. We found literally hundreds behind a pipe that had a gap next to a wall and lit them up with a cigarette lighter and Right Guard flame thrower.

Regarding the changes in Taiwan, I noticed when I returned in late 1966 on R&R from Vietnam that the place was really booming compared to May 1965 when I left.