This first picture is of the entrance to the West Compound. If you look toward the center of the photo, you can see two flagpoles rising above a small picket fence several yards ahead on the left side of the street. That was where the chapel was located. 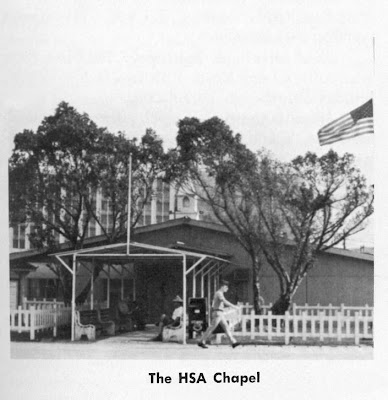 I was never inside this building, I'm ashamed to admit, but I did attend services at many other military chapels around the world. They typically had several rows of pews, or sometimes just chairs, with an aisle down the center of the room. There was usually a platform at the front of the building and that's where the chaplain delivered his messages. Sometimes there was a choir loft and usually a piano, organ, or both up there.

Because military chapels were for worshipers of all faiths, the interior was fairly neutral. I've seen some that displayed a large crucifix behind the platform during Catholic services, a plain cross during Protestant services, and a Star of David during Jewish services.

Email ThisBlogThis!Share to TwitterShare to FacebookShare to Pinterest
Labels: Compound

The Chapel was also the location of the Shulinkou AS bus stop. The benches under the canopy were used to wait for the bus up to Linkou.

The Navy Exchange Cafeteria in the West Compound (Aug. 14th post), located just down the street from the Chapel, was a great place to grab something to eat or drink while waiting for the Linkou bus.

Thanks for posting the first photo. The large building straight ahead beyond the picket fence was where I worked every day from Feb 10, 1965 until January 1, 1967 (The HSA Admin Office). I remember it well.