This wraps up the list of organizations that appeared in Taiwan Report.

I would only add one more: Detachment 14, 1131st USAF Special Activities Squadron. That's a long title for the relatively small organization made up of Air Force personnel assigned to the U.S. Taiwan Defense Command. It was more of an administrative channel than anything else, with our support coming out of an Air Force installation in Hawaii.

Detachment commanders in the Air Force were usually lieutenants, captains or majors, but because the senior Air Force Officer at USTDC was a major general (the USTDC Chief of Staff) he was also designated as Detachment Commander of Det 14.

That meant that his signature was required on even the most routine administrative and personnel actions. I remember having to prepare staff summary sheets and routing them up through three other offices for coordination and comments, just to get the general's signature on immunization rosters and other routine documents. 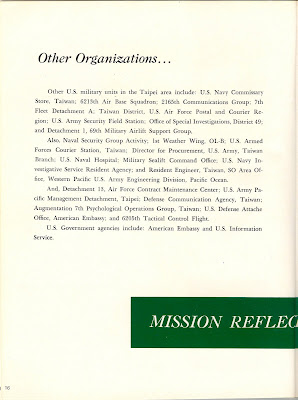 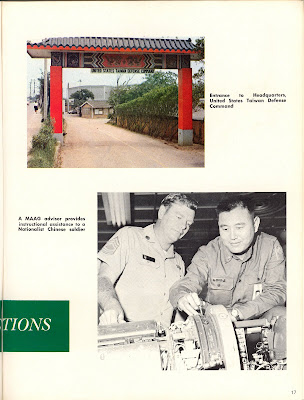