*** UPDATE ***
Jim Sartor just reminded me of the piece I wrote a few months ago that included a photograph of a bus that had plowed into his BOT house. I'll bet that brought some excitement into the neighborhood! 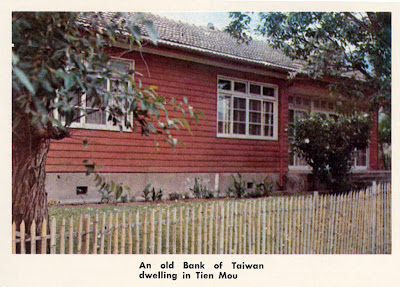 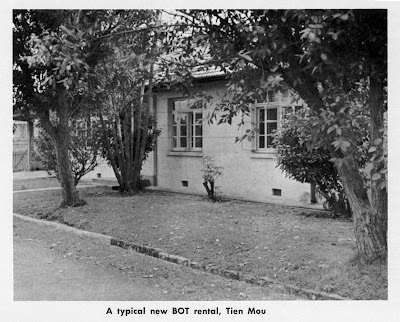 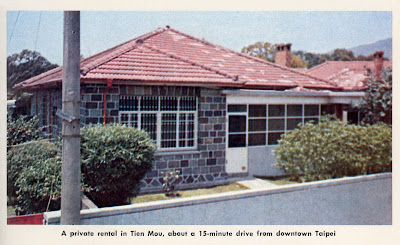 I recall that a number of my single friends had apartments and I assume that some married people did as well.

Email ThisBlogThis!Share to TwitterShare to FacebookShare to Pinterest
Labels: Housing

OMG, this pik of Old BOT housing
sure brings back memories. For those who never saw them, this pik
shows the front with the entry porch to the right.

Thanks for the memories!

The private dwelling is very much like the one we used to live in right down to the red gate, porch and barred windows. In lower Tienmu none of these houses survive that I am aware of. It really is a shame because most westerners have a very different perspective of Tienmu today and they are totally unaware of how 'suburban' it was.

I heard once that the BOT housing in Tienmu was originally Japanese barracks built during the 2nd world war. Can anyone confirm?

By the way. Some appartments built for US servicemen still exist in Tienmu. I can point them out on Google earth.

These are great pictures....I live in both the old and new BOT housing. When I arrived in 1973 there was such a long wait for the newer housing I had no choice but to take the old type. I visited Taiwan in 2001 and a few of the old houses are still there. (Not the one I lived in though). The new housing has given away to the new Taipei American School.
Thanks for posing such great pictures.
BIll

Misty: Re question about Japanese
having built what became Old BOT houses.

When we lived there everyone said that the Japanese did, indeed, build them. As proof, they offered the presence of round bomb shelters in every yard. These were covered with a steel hatch but they remained in the yards.

Another great set of photos! My boss lived in one of the 'new BOT' housing units featured in your middle photo; as I remember, these were duplex units with the carports on either end. He had a decent size yard, and inside was quite spacious. These sure bring back memories. Didn't someone superimpose the BOT housing area on a current (Google) map?

Also, I seem to remember a bowling alley? My bosses' boys were always hanging out there.....

[John wrote: "Also, I seem to remember a bowling alley? My bosses' boys were always hanging out there..."]

There was a bowling alley out there someplace, John. At USTDC, during 73-74, I participated in the "Nooners' League." There were two or three officers on our team and at least a couple of us enlisted types -- John Cranford and myself.

Teams all had custom bowling shirts made (remember custom-made clothing?) which wasn't terribly expensive. Ours had that "Granny" cartoon character that was in Playboy magazine embroidered on the back with the team's name, "Granny's Guys."

Basically it was just a good excuse to take off around noon on Thursdays and go drink beer, though we managed to stay sober enough to take the league championship.

As I recall, very few people went back to work after all of that...bowling.

There was a movie theatre, bowling alley, snack bar, and teen club located in the new BOT complex. It was on the right side of the road going into Tien Mou, just before the TREE......
Also, there was a little league filed and a swimming pool in the same location.
Thanks
Bill

Thanks for the extra comments! I too remember a mini-BX, a baseball field and swimming pool, although I didn't use. The few times I went to a pool was at Taipei Air Station. It sure would be great if someone could find some old photos of the Bolwing Alley, pool mini-BX area....

I don't believe the story about the Japanese building BOT houses is correct. The story I always heard was that, when U.S. forces began arriving in Taiwan during the 1950s there was no housing that met U.S. standards so the government agreed to build some. That's how the Bank of Taiwan ended up as both financier and landlord.

Japanese houses in Taiwan during that period typically had tatami mats on the floors and sliding shoji screens separating the rooms. Having lived in a "New BOT" house (i.e. the concrete type), I can tell you there were no Japanese features anywhere. Instead we had large rooms, fireplaces, bookcases and a western-style kitchen. There were lots of concrete bunkers all around Taiwan that were left over from the Japanese occupation. But the only concrete object with a cover anywhere near my house was a sewer cover.

And there was a second compound of New BOT homes on the opposite side of the road from the ballfield, theater, pool, etc. Today that area is occupied by a Japanese school.

We lived in two BOT houses on Grass Mt. In one section all the houses had bomb shelters. It's hard to tell but it looks like most of the houses are gone.
Mark

What terrific memories these photos and comments bring back to me. My late husband was stationed at NAMRU2 as head of the research animal colony in Taipei from 10/64 to2/68. We lived in both the new and old BOT housing. We moved to the old housing to save money. I loved it because we were more in the country and had some Taiwanese farmers as neighbors. My children went to the St. Vincent de Paul Nursery and Kindergarten run by the Sisters of St. Vincent from the Philipines. I could go on and on about our experiences, but will close with a big thank you and hope that some of the old BOT housing will be preserved