Les Duffin has sent several photos from a publication called Taiwan Report - Taipei Edition, which was a booklet mailed to service people who were being assigned to USTDC and elsewhere in the Taipei area. I remember this particular edition very clearly because it was the 1973-1974 version, the period when I was there.

I'll be posting a number of photographs and other things from this booklet in the weeks ahead. 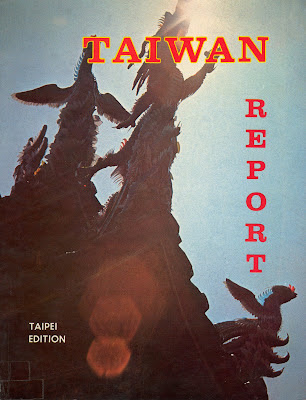 One of the busiest spots in the HSA east compound was the Navy Exchange. Army guys always called it the PX (Post Exchange) and we Air Force guys called it the BX (Base Exchange), but it was the same type of department store that you'll find at military installations all over the world. Here you could buy clothing, shoes, cameras, radios, televisions, records (you do remember records, don't you?), books, magazines and hundreds of other items.

I think there was a small building just to the right of the Exchange where you purchased major appliances like refrigerators and air conditioners. These were rationed to discourage black marketing, but you were allowed to sell them before you returned to the States. I think most guys had an agreement with someone to purchase the items almost as soon as they bought them, with the actual transfer taking place when they left.

If I remember correctly, there was another small shop to the right of the major appliance place where they sold things like custom desk nameplates. I had one made with a metal plate that had dragon designs around my name and I used it for many years, before finally tossing it a couple of years ago. 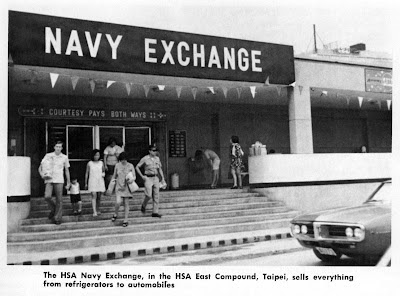 Of all the things that changed so much between your time in early 70's and my time in the early 60' , it appears the Navy Exchange stayed pretty much the same. It was the only place that felt a little like home, that and the commissary. The prices were great. Navy guys also called it the PX.