At the top of this blog is a shot of the front entrance of the United States Taiwan Defense Command as it appeared around 1978. The picture is a cropped version of one sent to me by Les Duffin some time ago and I thought I'd post it as well. It gives a little better idea of the shape of the place. Click on the image to view a larger version. 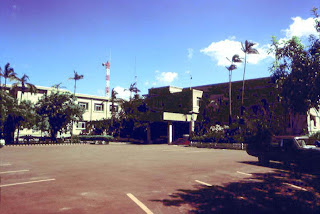 I believe the flagpole for the U.S. flag was just to the left of the camera and the Chinese flagpole was in the opposite corner of the parking lot to the left.

The porch overhang in the center of the photo was the main entrance. I always called it the front entrance, but whenever the call was put out over the speakers to bring the admiral's or general's staff car to this front door, it was always worded as, "Admiral's car alongside!" Don't ask me why. Good enough for John Paul Jones, I guess.

It seems to me that I once heard someone say that the building was originally built by the Japanese. I suppose that's possible, but I wonder if anyone out there knows for sure.
Posted by Don at 11/28/2007 06:41:00 PM

As to your question about whether the building was built by the Japanese, here's a little story.

At some point during my tour, we were having phone problems in the office. When a repairman came in, he opened up a phone junction box on the wall in the corner of one of the rooms. It was about 12x12x15, I recall. So he stops and says something to the effect: "Damn, this isn't going to be easy. All the labels are in Japanese, but I can read a date of 1945".

At the time, I just thought "Wow, that's some old stuff!" But maybe it ties in with the other story.

Taiwan was a Japanese colony from 1895 until 1945, so it's certainly possible that the USTDC building was constructed sometime toward the end of that period.