Several weeks ago I submitted a FOIA (Freedom of Information Act) request to Pacific Command Headquarters, requesting an official unit history of the former US Taiwan Defense Command in Taipei.

What I received in return was an appendix to the official CINCPAC history, which describes the Taiwan Wrap-Up -- a record of some of the events leading up to the closure of USTDC.

One of the tabs to the document was a transcript of President James Earl Carter's address to the nation on December 15th, 1978, in which he officially announced the recognition of the People's Republic of China by the United States. I am posting the full text here without comment:

Good evening. I would like to read a joint communique which is being simultaneously issued in Peking at this moment by the leaders of the People's Republic of China:

JOINT COMMUNIQUE ON THE ESTABLISHMENT OF
DIPLOMATIC RELATIONS BETWEEN THE UNITED STATES OF AMERICA
AND THE PEOPLE'S REPUBLIC OF CHINA
JANUARY 1, 1979 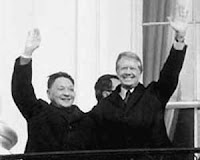 The United States of America and the People's Republic of China have agreed to recognize each other and to establish diplomatic relations as of January 1, 1979.

Yesterday, the United States of America and the People's Republic of China reached this final historic agreement.

On January 1, 1979, our two governments will implement full normalization of diplomatic relations.

As a nation of gifted people who comprise one-fourth of the population of the earth, China plays an important role in world affairs -- a role that can only grow more important in the years ahead.

We do not undertake this important step for transient tactical or expedient reasons. In recognizing that the government of the People's Republic is the single government of China, we are recognizing simple reality. But far more is involved in this decision than a recognition of reality.

Before the estrangement of recent decades, the American and Chinese people had a long history of friendship. We have already begun to rebuild some of those previous tiers. Now, our rapidly expanding relationship requires the kind of structures that diplomatic relations will make possible.

The change I am announcing tonight will be of long-term benefit to the peoples of both the United States and China -- and, I believe, too all the peoples of the world.

Normalization -- and the expanded commercial and cultural relations it will bring with it -- will contribute to the well-being of our own Nation, and will enhance stability in Asia.

These more positive relations with China can beneficially affect the world in which we and our children will live.

We have already begun to inform our allies and the Congress of the details of our intended action. But I wish also to convey a special message to the people of Taiwan, with whom the American people have had and will have extensive, close and friendly relations.

As the United States asserted in the Shanghai Communique of 1972, we will continue to have an interest in the peaceful resolution of the Taiwan issue.

I have paid special attention to ensuring that normalization of relations between the United States and the People's Republic will not jeopardize the well-being of the people of Taiwan.

The people of the United States will maintain our current commercial culltural and other relations with Taiwan through non-governmental means. Many other countries are already successfully doing so.

These decisions and actions open a new and important chapter in world affairs.

To strengthen and to expedite the benefits of this new relationship between the People's Republic of China and the United States, I am pleased to annoounce that Vice Premier Teng has accepted my invitation to visit Washington at the end of January. His visit will give our governments the opportunity to consult with each other on global issues and to begin working together to enhance the cause of world peace.

These events are the result of the long and serious negotiations begun by President Nixon in 1972, and continued by President Ford. The results best witness to the steady, determined bipartisan effort of our own country to build a world in which peace will be the goal and the responsibillity of all countries.

The normalization of relations between the United States and China has no other purpose than this -- the advancement of peace.