In my last post I mentioned that Dennis McNelis had sent me a few images from his time in Taipei. Today I'd like to post some of those that might bring back some memories of long ago in a galaxy far, far away: 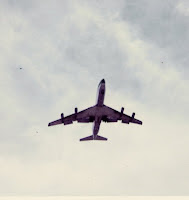 As I said some time ago, the final approach to what was then the international airport was directly over the hostel and the east and west compounds. This photo gives some idea of what it was like, but the planes appeared much larger as you looked out the window. Now only could you see landing lights, but you could actually see the cabin lights at night, and the noise and vibration were just incredible.

I knew one group of apartment dwellers made up of two navy females, one navy male, and one marine male. I have no doubt that there was plenty of activity in the place, but the folks who lived there were more like brothers and sisters. Today, that would be like any campus area apartment in the US, but it was sort of unusual then. At least I thought so. 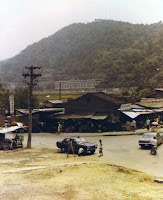 Email ThisBlogThis!Share to TwitterShare to FacebookShare to Pinterest
Labels: Housing, The City

The bowling alley in the background on the Shihlin picture is still there but it's probably the only think in Shihlin that you might recognise.

'Sugardady row' and the 'combat zone' bar areas are still drinking areas. They have been since the Japanese were in Taiwan and I guess it will stay that way for a long time. A couple of the bars have been open since the '70s and I know one still has the same name.

I used to bowl in a Thursday afternoon league ("The TDC Nooners League"). I can't remember if it was at this location in Shihlin, but it was out in that general direction somewhere.

There was a bowling alley in the military compound in Tienmu behind the BOT buildings that was US forces only. The one in Shihlin was open to everyone and has an ice rink downstairs.

There was also another US run bowling aller on Grass Mountain that I have no recollection of visiting even though I spent a lot of time up there.

That's right! I'm almost certain that the TDC Nooners League bowled at Tienmu when I was there. I sure don't remember anything about an ice skating rink. I also remember that there was a bowling alley in the west compound. About the only thing that I can recall about it was that the lanes themselves were slightly elevated and you had to step up to get to them.

For the past several years, I have been living just about 5 blocks from the bowling alley in the photo. I know this part of town fairly well, and can't believe that it looked so un-developed as recently as 1973. You can't see the bowling alley from that spot now. The bowling alley is easy to spot on google earth.

The 4-story apartment houses that went up around there in the mid 70s (like the one I live in) are now considered pretty old, and 12-story apartments have been going up in the neighborhood in the last few years. This is considered a pretty convenient place to live, since it is close to the JianTan MRT station.

I believe the photo is overlooking the train track which was there until the late 80s, but was then replaced by an elevated MRT commuter train.

I am always interested in seeing old photos of places I know around Taipei and Taiwan-- fascinating to see how things have changed. In case you want to share some photos with me, my yahoo-dot-com e-mail address is
distichum2