A couple of weeks ago I posted a request from a woman who was in Taipei for a short time and wanted to visit Tien Mou, where she lived as a military dependent from 1969 to 1971.  She received several helpful tips from readers and was able to locate the area where she and many other military families once resided.

In response to her request, Les sent me several photographs that he took of the area during a visit to Taiwan in 1984.  Much had changed by then and of course there have been more significant changes since then, but I thought that the photos might be of interest to many here.  They capture Tien Mou as it appeared approximately five years after the departure of American military families.

Because there are many photos in this collection, I intend to post them over a three day period.  The first two today show the general area, including the Mongolian Barbecue.  Photos three through six are of the west side of the street where the Japanese school now stands. 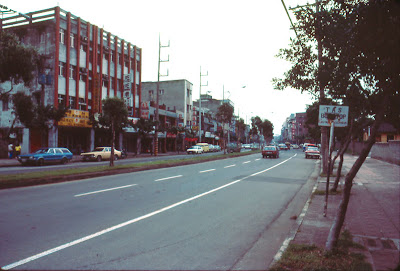 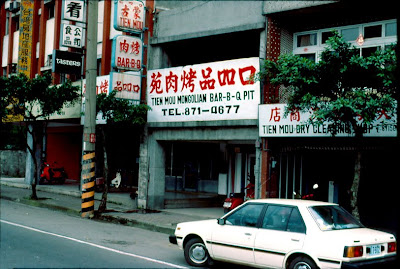 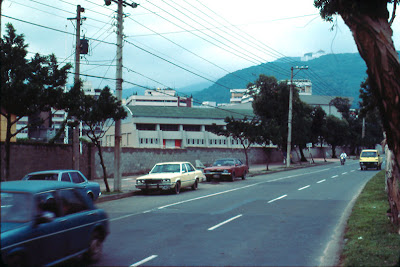 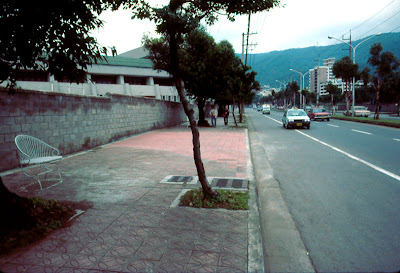 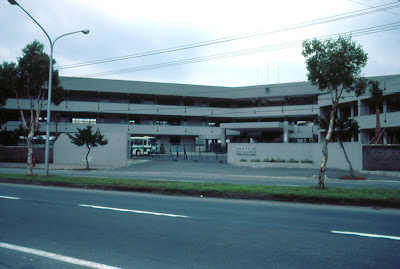 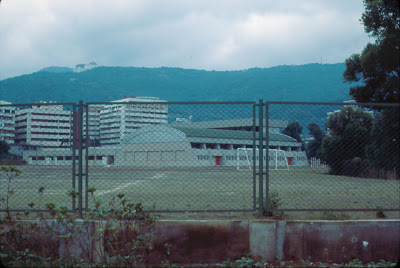 I am pretty sure Tienmu dry cleaners, next to the Mongolian BBQ is still in business and in the same location. They have been there 40 years at least.

In the top picture that's a TAS (Taipei American School) bustop on the right.

Looking forward to the rest of the series.

The following is what I've found about the Tien Mou Mongolian Bar-B-Q. http://www.taiwan-yellowpages.com.tw/CompanyInfo.aspx?firmid=3567 Maybe it's still in business at a different location? The current address is 23 Lane 140 Sec 2 Jhongcheng(Zhongcheng忠誠) Rd, behind the TAS.

At that time the Mongolian BBQ had two shops joined together. However, as the old road in Tienmu wasn't so flat as the new one there is often a big difference in heights between one building and it's neighbour. I don't know if anyone remembers but walking the length of the shops in Tienmu was tricky because if you weren't paying attention you'd fall down the drop to the next level.

You can see this in the photograph. The BBQ section was in the back of the upper left hand side.

I went to 23 Lane 140 Sec 2 Jhongcheng Rd today but I didn't see any sign of a Mongolian BBQ store. Also, I found two dry cleaners on Section 7 ZhōngShān North Rd(Tienmu Road 1) not far from the roundabout, but neither of their names is Tienmu Dry Cleaner.

Victor. The dry cleaners is next to Pizza hut about half a block south of the old location.

I notice that Tasters is still there as well.

Thx, Misty. I've found the dry cleaners from Google Maps. http://www.wretch.cc/album/show.php?i=vicwk&b=2&f=1551082656&p=2 The address is No. 738, Section 6, ZhōngShān North Rd. It's very interesting to see the Chinese name of the store on the signage is from right to left, the old-fashion way, and the phone number is 7 digits only, which is now 8 digits in Taipei.