***UPDATE***
Good old Titojohn came up with a much better quality photo of the first photo below. He also learned that it was actually taken in 1949. As he pointed out, the lettering over the main entrance reads "Taipei Guest House" and the photo ID at the Life archive says that it was a "Guest house where exilers are temporarily put up."

I've replaced the image that was here so you can get a better look at it. Just click on the image to see the full size version. One other thing: The new photo reveals that what I thought was a park looks more like a storage dump. You can see what appear to be logs and other (building?) materials there.

***************
I don't think I've ever before seen this Life Magazine photograph of the USTDC building. It was taken somewhere around 1950. I would very much like to know what it was being used for at that time, since USTDC had not yet been established, but it's clearly the same building. The area that became the front parking lot looks like it might have been a garden or park at that time. 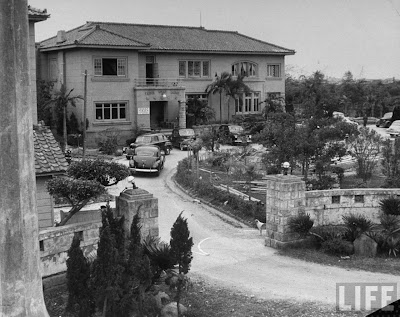 The next photo shows what the area looked like ten years later. The park, or whatever it was, became the front parking lot. The entryway walls were removed and the entrance was moved several yards further up the driveway. 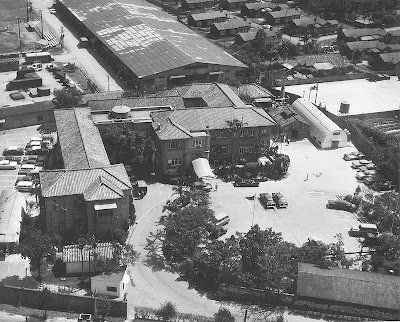 The last photo shows the building as it appeared around the late 1970s. The shot was taken from the southwest corner of the main parking lot, with the main entrance at the center of the photo.

Among other changes, note that in the first photo there was no cover over the steps to the main entrance. In the second photo there was what appears to be a corrugated steel awning, and by the 1970s, when I was there, the awning was replaced by a permanent roof. 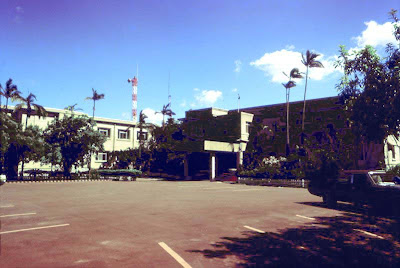 Boy that is interesting. I think we are getting closer to finding out what the original building was used for. In this most recent Life photo it looks like and embassy typed building. Thanks Don keep digging.

I can blow up the photo and see that the sign above the entrance is "Taipei Guest House." Not to be confused with the current and much grander "Taipei Guest House" which can be found on Wikipedia which was the former House of the Governor-General of Taiwan during the Japanese rule. The name of our building indicates to me that it was either a residence for visiting dignitaries or a hostel of some sort for foreigners as the sign is in both Chinese and English.

The photo was taken during 1949, the same year that Chiang Kai-shek and his son, Chiang Ching-kuo, along with half a million Chinese soldiers and some 2 million Chinese refugees, re-established the Republic of China on Taiwan.

Titojohn pointed out to me that the cars in front of the building appear to be 1946 Fords, and he also sent me a pic of a Ford garage that was in Taipei that same year.

I'm guessing that the building was possibly a guest house for some of Chiang's VIPs until they staked out their own space on the island. Obviously I have no way of knowing, but I'll bet that there are still some around who might remember this building or what it was used for prior to 1949.

But Chiang didn't arrive until 1949 and the building is obviously a lot older than that. I'm sure that when I was there, someone told me that it was built by the Japanese. I think they may have said it was an officers club or was for some other "recreational" purpose. But in my worldwide travels over the years, I could be mixing up my stories.

Also, notice the Chevy has no license plate. Could make me believe they belonged to some of Chiangs boys.

Notice the lighter colored sign just to the left of the entry steps. Can anyone make out what it might say?

By the way, did anyone notice the "sentry" in the top photo?

If you look closely, there's a dog just inside the gateway to the right.

The smaller sign to the left of the front door reads: "America, please send a three star admiral and he can have this building, call it USTDC if you like, but just send him." Direct translation.

http://www.scsb.com.tw/english/his_default.jsp
SCSB(Shanghai Commercial and Savings Bank) was established in Shanghai in 1915.
http://www.scsb.com.tw/history03_iframe.jsp 1946 12月 當時台灣於日據時期有一「大和飯店」，位於台北圓山下，基隆河畔動物園對面，為圓山飯店未成立前唯一西式飯店 (Back in the Japanese era, there was a hotel called "Yamato Hotel" nearby Yuan-Shan across the Taipei Zoo on the riverside of Keelung River. The Yamato Hotel was the only western-styple hotel in Taipei before the Grand Hotel was built.)
本社接收後改稱「台北招待所」，後1950年代被政府徵用，充作美軍協防台灣司令部 (The Yamato Hotel was taken over by SCSB in Dec 1946 and the name was changed to Taipei Guest House. The Taiwanese government took over the house and assigned the building to USTDC later in the 1950's.)

Thanks Victor. As Paul Harvey used to say.... "And, now you know the rest of the story."

Victor, I can't thank you enough for providing us with the history of the USTDC building (or hotel...or guest house).

I would like to add my thanks for your information regarding the building. We now know some more of the missing history. May I ask how you found the information as I don't see it mentioned on the SCSB website? Without you we would not have known. Thanks Again.

John, Don, and George,
The pleasure is all mine. Just type "台北招待所"(Taipei Guest House) on www.google.com.tw and you'll see what I've found. Most of the results are, however, written in Chinese. Hope my translation on the info I found from the SCSB website is OK.