It's been more than thirty years since I left Taipei, but I've been thinking lately about some of the characters that I used to see on the sidewalks near the HSA compound. These were folks whose main objective was to separate a young GI from his money. It was probably easier if the young man had been hitting the local watering holes for a few hours. 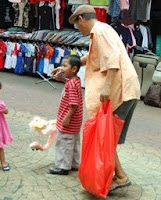 For example, there was a guy who sold some sort of bird-like marionettes similar to the one shown here. It seems to me that he also sold a fuzzy snake puppet that was pretty cool.

One duo I saw all the time was a blind guy in dark sunglasses, being led down the street by a friend. The friend would walk up to you and ask for a donation. Sometimes you'd notice that the friend played the role of the blind guy and the blind guy became the friend. Hey, it's a living.

And there were kids peddling everything under the sun. You learned pretty quickly that the trick was just to avoid eye contact, hold up your hand, and keep walking. They'd quickly head off in search of someone new to the island.

I honestly don't remember any hustlers standing outside of clubs encouraging you to come inside, or at least nothing like I'd experienced ten years earlier on Okinawa. I really didn't run the clubs in Taipei, so maybe someone else can comment on that, purely in the interest of historical accuracy of course.
Posted by Don at 12/06/2007 03:00:00 PM

Email ThisBlogThis!Share to TwitterShare to FacebookShare to Pinterest
Labels: Characters, The City