Taipei Scott recently came into possession of a couple of mementos that belonged to Vice Admiral Philip A. Beshany.  VADM Beshany was Commander of the U.S. Taiwan Defense Command from September 1972 to August 1974.   The first is a plaque from GEN Ching Wei-yuan, Commander of Combined Service Forces, to VADM Beshany and the other is from the Philippines Navy Commodore Ruiz to VADM Beshany. 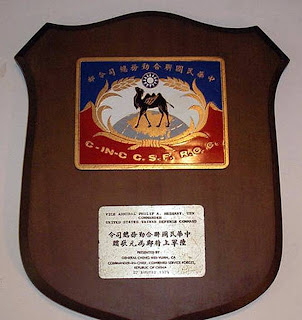 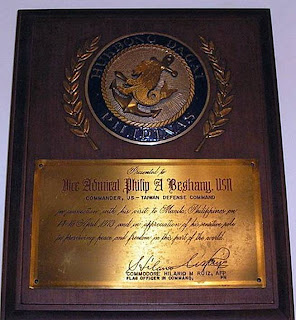 VADM Beshany passed away in December 2011, as I wrote in this article this past February.  He was the eighth Commander of USTDC and I served under him there for all but the last few days of my tour.
Posted by Don at 5/15/2012 02:50:00 PM

General Cheng Wei-yuan, whose name appears on the CSF plaque, was a prominent figure in Taiwan. By the mid-1970s he had moved to a new position as CINC of Taiwan Garrison Command, a job he still held when I left in 1978. Later he retired and became chairman of VACRS, the Vocational Assistance Commission for Retired Servicemen. And by the mid 1980s he had been appointed Minister of National Defense.