I received some comments and photographs from Les D. regarding the recent discussion here about the Hsin Sheng Theater:

Since that film clip of Taipei in the 60s caused a few comments about the Hsin Sheng Theater, I thought I’d dig through my old slides and see if I could find some photos of it.

The first three shots were taken sometime between 1962 and 1966, probably closer to the earlier date than the latter. They proceed south along hagglers’ row. Notice the pedicab in the one shot, and the general lack of traffic. The Hsin Sheng Theater is the building on the left in the third photo, surrounded by bamboo scaffolding. 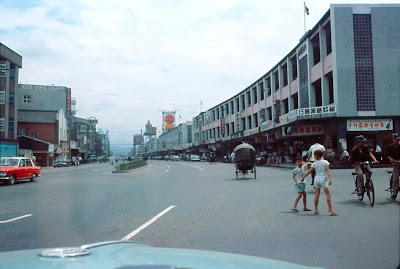 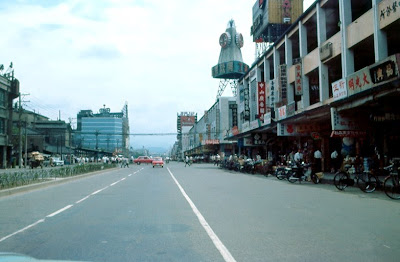 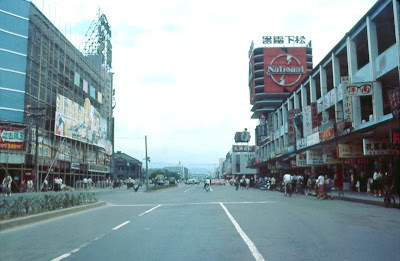 [The next two] are pics of the theater, though the train in the last was obviously my focus. 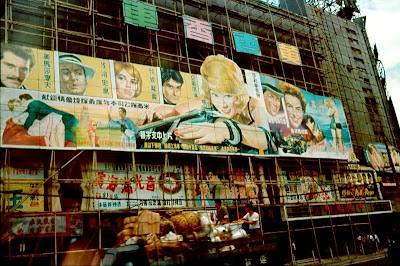 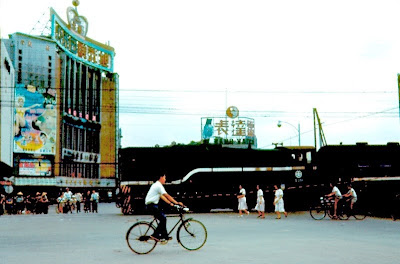 The last pair of photos were taken between 1971 and 1978. The first one shows hagglers’ row from the opposite direction and with much more traffic. The second one was taken after the overhead walkway was built across the railroad tracks and shows the theater in the right center. 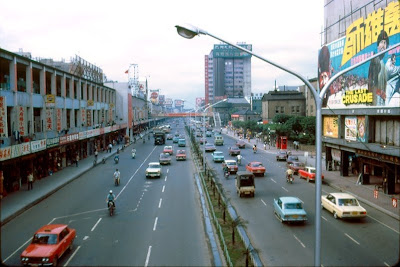 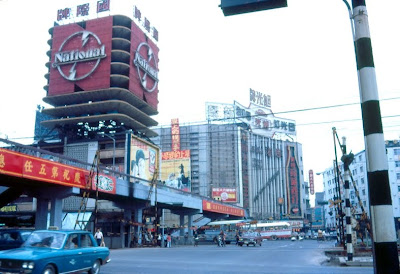 Email ThisBlogThis!Share to TwitterShare to FacebookShare to Pinterest
Labels: Recreation, The City

The traffic in the first 3 pictures is closer to what it looked like when I was there in 1959-60. Haggler's Row had changed quite a bit though. I went to Taichung for a July 4 break in 1960. When I left, Haggler's Row was mostly a series of 1 story tin roofed shacks lining both sides of the train track. When I came back a few days later, all of the shacks had been torn down and their residue hauled away. I can see what replaced them in your pictures.

Another big change from my time was the trains. Your picture of the train shows a diesel locomotive. The trains I remember were still pulled by steam locomotives.

I loved those giant, uber-billboard sized movie marquees. As a civie dependent I saw my share of films at DOD theaters (as a guest of school chums from TAS) and down at the local venues in Taipei. It was at those downtown theaters that I learned to sing the ROC national anthem...and I can still do it. Although my kids now hold their ears when I insist on belting it out during our annual Double Ten dinner. It’s also where we learned to chew betel nut. All of the big downtown movie houses sold tickets to seats and were not first-come-first-served general admissions. Most western films were screened in English and the screen was often half obscured by the Mandarin subtitles when the dialogue got heavy. The other thing I remember was a very strict censorship code that would not allow nudity, the suggestion of sex, or violence that was directed at authority figures. I remember seeing "The Godfather" in both American and Chinese venues. The version shown out in Tien Mou was essentially the same as what you can view on the DVD today. The version I saw downtown was chopped down by at least two reels and concluded with an epilogue not in the original theatrical version. Translated, it basically warned exiting moviegoers that all of the characters depicted in the film were eventually captured or arrested, tried and convicted for their criminal ways, and all ended up doing hard labor in the pen.
Thanks for posting.

I'm sure the last picture was taken in 1972. Please notice the sign on the overhead walkway which says "The Inaugural Celebration for the 5th President....". CKS' swearing-in of his 5th term as the ROC President(also the last term in his life) took place on May 20, 1972.

Does anyone know the history of what seems to be called "Hagglers Row". The long structure of small shop units on the right in the first three photos.

I've seen it on photos from the 50's but when was it built? I know a lot of people were very saddened when it was pulled down. It had a lot of character.

And Jim is right. Those billboards are a higher art form. It's a shame they were so temporary.

Thanks for the info Victor. I have fond memories of walking up and down all the little stalls. It was an interesting way to spend an afternoon.