Jim Sartor sent these photos of some things that he purchased during his time in Taipei. His remarks are next to each one. I wrote previously about the coffee table and end tables that I bought while I was there. One thing I didn't mention was that many of those coffee tables, like mine, could be broken down into three pieces. Each piece was exactly the maximum size allowed for the APO -- the military mail system -- so that even people who were in Taipei on R&R could buy a set and ship them home. 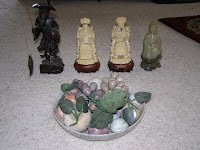 This is a marble bowl, marble eggs and marble fruit that you could buy on Chung Chan North road for about 10NT each. 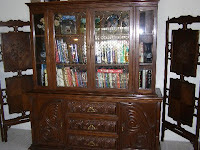 This is one of the carved bookcases and carved screens that were made by Singer Lee in Shih Lin. They're still perfect after over 35 years. 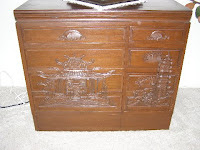 Believe it or not, this is really a sewing machine cabinet. The top flips to one side, the sewing machine lifts up and the left front panel slides out to become a chair for sewing. Clever huh?
Posted by Don at 3/04/2008 01:29:00 PM

Sweet! Marble fruit. There's something I'd forgotten about.

That old furniture is well made. You won't find craftmanship like that now very easily in Taiwan.

I have my parents dining room set that they bought in Taipei. It still looks great. Super sturdy.

Taiwan was a spectacular place to buy furniture! Almost everyone I knew bought something, and many of us (young families) bought everything – dining room, living room, bedroom, bar, grandfather clock, stereo cabinet, etc.

I left Taiwan in 1974 – and was only 500 lbs below my max (JTRS) weigh limit of 7000 lbs. I had a beautiful custom stereo cabinet made; only $200 (alas, it is now with the ex-wife). With the split from the ex-wife, I managed to keep the bedroom set, bed frame, two nice end tables (with secret storage compartment below the bottom draw), and a triple dresser with two mirrors. Wife #2 never liked this furniture; I sold it to a lucky neighbor’s son for $150 (about half the original cost).

I still have a few items, including a four panel folding screen (cost $240); a folding bar with marble top (cost $150), and a 9 x 12 oriental rug (cost $300). I kept a very nice oil painting by Tammy Tseng – I think it cost $35 with the frame! I also still have two very nice marble and brass lamps, I think they cost about $25 each; I still polish up the brass once a year and they look great!

Just as Don mentioned, I remember the exchange catalog sold ‘breakdown’ versions of the marble topped teak veneer coffee tables, and also grandfather clocks. I don’t know if they still sell Taiwan furniture in the catalog, but it was a very good deal for years!