I've been following the news reports on Typhoon Sinlaku. As I write this on Saturday afternoon, the slow-moving typhoon is dumping rain all over Taiwan, and the forecast is for as much as nine or ten inches of rain by Tuesday.

Here in the States, of course, Hurricane Ike just nailed the Gulf Coast last night, especially the areas in South Texas. That storm, though no longer a hurricane, is projected to hook to the northeast, right up over East-central Illinois (where I happen to be located) and dump five or six inches of rain here. In this part of the country, five or six inches of rain represents a major flooding threat.

None of this is good news, but to sort of keep things in perspective, Sarj just sent me a batch of photographs that were taken somewhere in Taipei, probably sometime in the late 1950s or so. Sarj doesn't know who took these shots or the exact locations, but since some of the faces appear to be American, it seems likely that they're in the general vicinity of USTDC and the HSA compound. 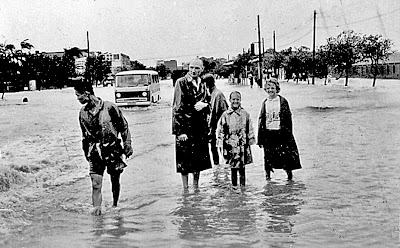 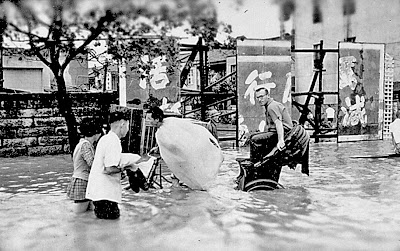 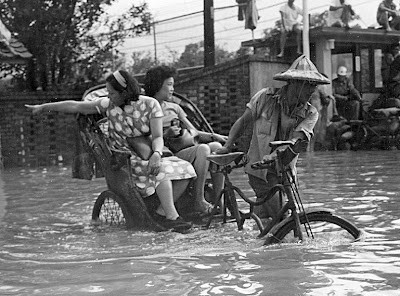 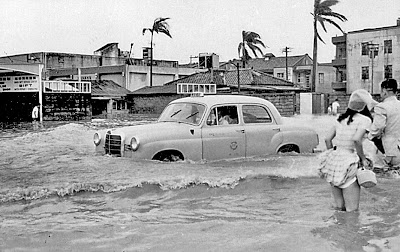 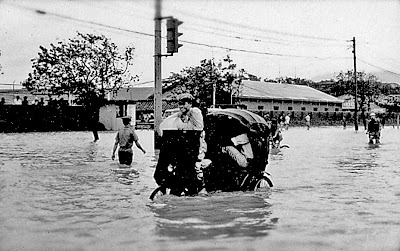 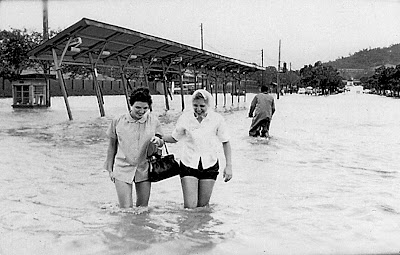 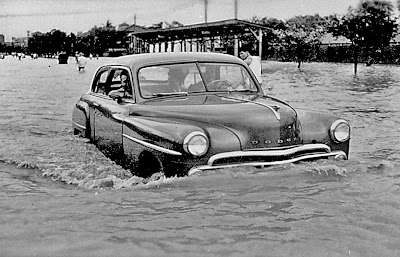 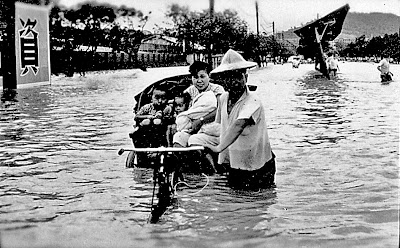 Email ThisBlogThis!Share to TwitterShare to FacebookShare to Pinterest
Labels: The City, Traffic, Typhoons

Seeing is believing! Isn't that a Mercedes taxi sloshing down Chungshan North Road? I remember the red and blue Datsuns and Bluebirds, but never recall seeing a Mercedes taxi during my time.

I believe most of the Pics are along Chungshan North Road just near the HSA Compound entrance. My favorite is the Mercedes taxi with the lady lifting her skirt. Nice.

I think I can identify some of these:
Photo 1 is Chung Shan N. Road, looking south from the vicinity of the HSA compounds. That white sign on the building just above the roof of the minibus is "K" Tailor and Shoe, where lots of GIs had suits, shirts and shoes made.
I think photo 2 may be the canal (behind the sign) that used to run perpendicular to Chung Shan Rd south of the Linkou Club. That canal later disappeared when Min Tsu Road was built.
I can't help with photo 3.
Photo 4 is, I think, the Linkou Club - it's that two-part windowless concrete structure behind and to the left of the Mercedes cab. The scene is looking southeast. The sign to the left (gift shop?) is, I think, the entrance to the small arcade which connected the club with the street. That too went away when Min Tsu Road was built sometime in the late 60s, and the club's door ended up right on the new street (there's a photo somewhere, maybe on the Shulinkou website, of the building at that time and the shape is clearly the same. The aforementioned canal, by the way, would have been to the right of the photo, on the near side of the 3-story concrete building.
Photo 5 looks northwest toward the HSA West Compound; the entrance is just over the pedicab driver's right shoulder.
Photo 6 is a more distant shot of the same area. There appears to be a truck entering the West Compound, just between the two women's heads.
Photo 7 -- the Dodge wading through water -- is a tougher call, but it MAY be looking southwest and that MAY be the West Compound wall on the right.
Photo 8 looks almost north along Chung Shan with the West Compound on the left. That sign with the Chinese character at the extreme left was just across the street from the Linkou Club.

I can't say I recognize anyone in the pictures, but there was a flood of that magnitude about a month before I arrived in Taipei in August, 1959. I remember seeing pictures of the flood, but my memory isn't good enough to say that these are the pictures.

I remember a typhoon and heavy flooding in the fall of 1969. I remember walking from my apartment to the apartment of my friend one block away and the water was over my knees and I kept trying not to think of all the disgusting things that were in the water. When I got to my friend's apartment I remember getting in the shower to wash my legs. And now this old brain can not remember the name of the area where these apartments were. I lived in an apartment with an army sgt...Michael Bruce Bales, and my friend, Don Smith, lived in an apartment with two guys who's faces I can see, but the names are gone. One of the guys was from NYC. I also remember washing my jeans by hand and hanging them out to dry on the back balcony of the apartment, third floor, and the next day, my jeans were gone. As the memories flood my brain I just sit here staring out the window. It was so long ago and yet, such a HUGE event in my life. 15 months in Taiwan. I was so young, I had no idea what it all meant.

Isduffin.......Thanks for the ID's on the photos. Your memory is very good. I have been trying to think of the tailor shop name forever. K tailor , that's it. Yes I had shirts made there and a sport jacket. They did very good work for a small price. I thought about getting shoes made but couldn't make up my what kind to get.