***UPDATE***
George pointed me to this photo that was on Wikipedia. He says that the original photo that I posted here was probably a patriotic reply to Chiang's original carving, of which there are several. 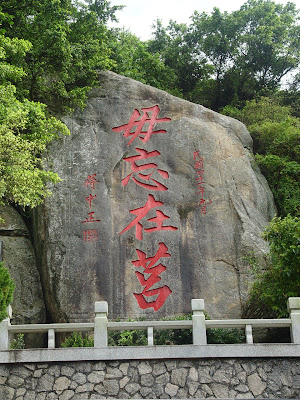 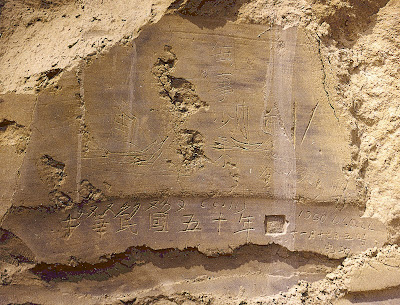 A couple of days ago I posted some 1962 images from Kinmen. One of them showed what appears to be a slab of cement with writing on it. Les commented: "There is a date on the bottom, November 17, 1961, written in Chinese characters, plus another date written in Arabic numerals. That one is sometime in 1960. The rest looks like lots of scribbling. Maybe just graffiti."

Sarj rescanned the photo and cropped it to give a better view of the characters on it. Click on the image to see an expanded version. If you see anything here that you can identify, please leave a comment.
Posted by Don at 9/16/2008 08:46:00 AM

It appears to be a response to General Chiang Kai-Shek who vowed but never managed to take back the Mainland. He carved a similar
rock inscription on Kinmen's Mount Taiwu in 1952: "Wu wong tsai Ju" ("Do not forget Ju"), a reference to a Warring States period battle in which 37 states were recovered. This photo has a similar set of four characters: "Wu Shih Shao Lai/Wei" (Can't translate it). But there are also two boats and a signature seen as well as a date across the bottom: "Republic of China 50th Year" "1960, November 17th, 5pm."

Thanks very much, George. I could see the two boats in the expanded version of the photo but that was about it.

I wonder if there was any significance to the cement itself. It seems logical that it sealed off something, but there's no way to tell what that might be.

Wow, who would think that an old photo I had laying around fro 45 years would reveal so much. I think it's cool what ever it is and what ever it says. Thanks George for the info.